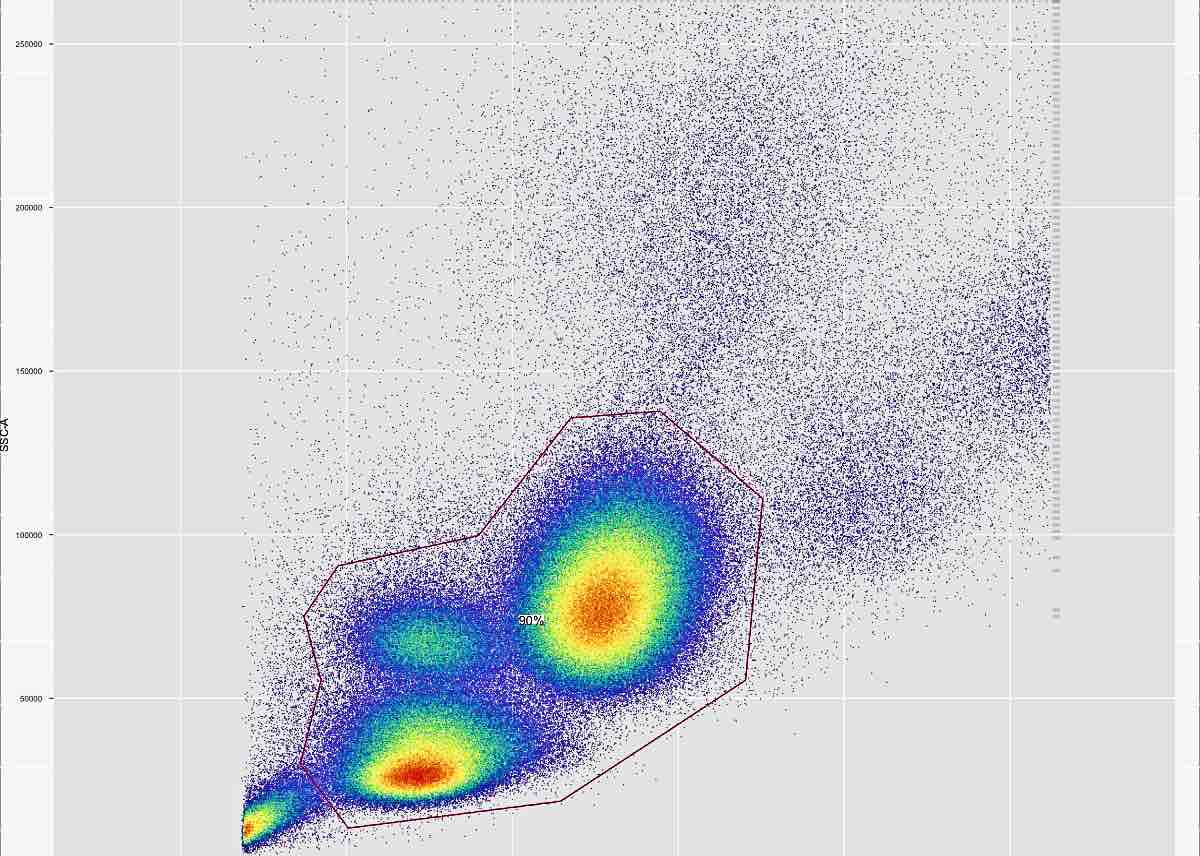 Resolution in flow cytometry means exactly the same as it means when referring to image or screen size, which is the amount of pixels per unit area, or alternatively, dots per inch. In flow cytometry, resolution is important to consider because the number of pixels per plot can drastically change an image, and even render it biologically misleading. This is because only one ‘color’, usually denoting a data point, can fit per pixel. So if a plot only has 100 pixels in the entire thing, then only there are only 100 little squares that can be colored!

Let’s use an obvious example to show the impact that resolution can make on your plots. Below is a dot plot with low resolution. You can see that it’s uninformative, and even potentially misleading:

In this example, there are very few pixels available to be colored in this area, and thus it’s very hard to delineate separate populations and know where to draw a gate. Additionally, to the untrained eye, it appears that there are WAY more cells collected than there actually were. That’s because the pixels are very large and only require one cell per pixel to be colored in. The end result is that the colored pixels cover almost the entire plot, and it looks like there is a ton of data when in fact, there isn’t.

In other words, plots with differing resolutions can paint a very different picture of the data.

Below is another example of how resolution can change your flow cytometry dot plots. In this case, the resolution in each successive image is double that of the previous one.

Pretty interesting, right? As the resolution improves, the populations become tighter and tighter until you can see with a much greater degree of accuracy how many cells were actually acquired during this run. You can also clearly distinguish the different cell populations shown in this whole blood samples. This is very helpful for gating precisely and weeding out those cells in which you’re not interested.

Take note of the downside of increasing resolution: the colors get lighter! That’s because when the resolution is really high, each pixel is much smaller, and so the amount of coloration is decreased compared to that in the low-resolution plot. The result is a dimly colored plot.

So, what should you do if you want to gate or publish your flow cytometry dot plots?

As with everything in science, it really depends. For gating and the entire analyses, it might be better to use the highest-resolution images, so that you can draw the tightest and most precise gates possible. Of course, this is only possible in programs that allow you to adjust the resolution, such as R, which was used here.

Many journals actually specify the resolution of your images, such as 90 DPI (dots per inch), where dots are analogous to pixels per unit area. In these case, you don’t have to worry! Just save your image as a high-quality PDF and convert it to the DPI that you need.

If it’s up to you, then consider several factors:

1) The goal of what you’re trying to demonstrate with your data,

2) Whether your populations are bright, robust, and well-separated,

3) If you’re looking at rare events, and

4) How many fluorochromes you’re using in your assay.

If your data is not well-separated, you’re trying to highlight rare events, or you’re using 8+ fluorochromes in your assay, a good option is to use high-resolution images but optimize them so that the background is in start contrast to the dots, making the data points stand out and easier to see. I optimized the feature image for this post, it’s actually the second-dimmest one based on resolution, but a little PhotoShop helped to make it look much brighter!

If you’re highlighting populations that are quite clear and robust, or using only one or two colors, then it’s probably fine to use the lower-resolution images.

FlowJo by default chooses a compromise and runs at a default resolution that you can’t adjust, where the resolution is low enough that the populations are bright (and the software runs quickly because the file is smaller), but high enough that the gating is mostly accurate.

Good luck and thanks for reading!