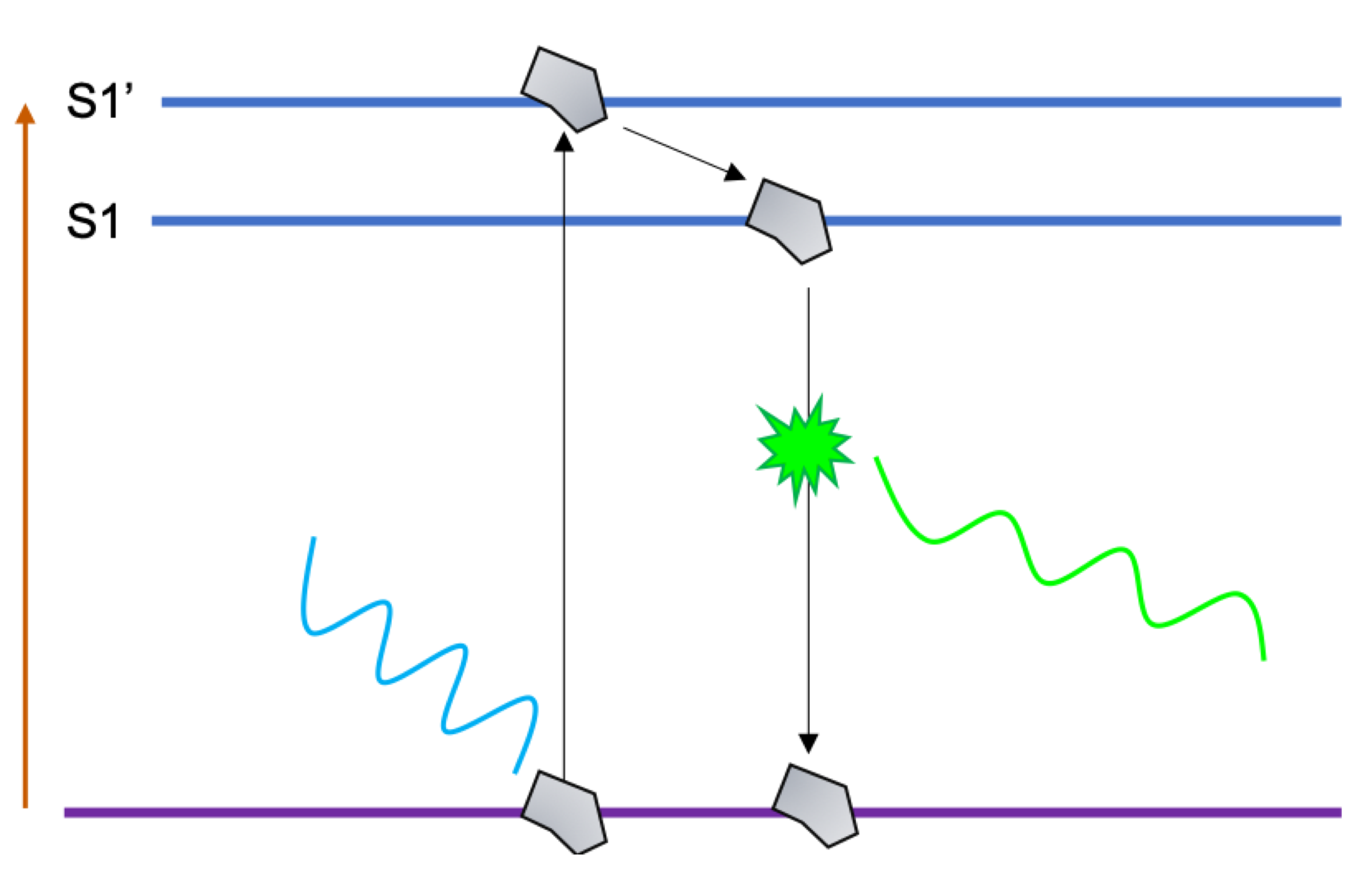 Fluorochromes are a critical component of flow cytometry experiments. Without them, we would not be able to detect specific antigens on the surface of a cell or particle, making characterizing cell phenotypes and functions impossible. Fluorochromes operate with the principles of fluorescence, and in this post I’ll explain how fluorescence works, and then dive into fluorochromes and flow cytometry.

Fluorescence is the emission of light after the absorption of energy, usually from a different source of light or radiation.

After absorbing energy, fluorescent light is emitted at specific wavelengths, and some of those wavelengths correspond with visible colors. For example, when a jellyfish fluoresces and it looks blue, the corresponding wavelength at which the light travels to your eye is approximately 488nm.

A fluorochrome is a molecule that absorbs light from a specific wavelength and emits light, or fluoresces, in another wavelength. More specifically, when fluorochromes absorb light from a source they become temporarily excited (a state of increased energy), and then emit energy in the form of light to return back to its ground state. This emitted light can be collected and identified, enabling researchers to recognize what fluorochrome they are seeing by the wavelength of emitted light. You may have heard of popular fluorochromes such as FITC, PE, and APC. These fluorochromes are excited by blue light (488nm), yellow-green light (561nm), and red light (640nm), respectively. They emit light at different wavelengths, too. These differences makes it possible to distinguish the three different fluorochromes when looking at the light that they emit.

You can see then that the excitation and emission wavelengths are different from each other. The difference in the peak of these wavelengths (there is some variation of wavelengths emitted around the peak) is called Stokes shift, shown here:

Using fluorochromes with a large Stokes shift is ideal in flow cytometry so that the emitted light collected is not confused with light generated from the source, usually from a laser.

Fluorochromes are not all created equal

If you’ve worked with fluorochromes, you know that some look brighter than others in the microscope or in a flow cytometry instrument. For example, PE and BV421 are two very bright fluorochromes. This is because when fluorochromes emit energy in the form of photons, some photons actually carry more energy with them than other photons, as a direct proportion to their wavelength. So, fluorochromes that are excited by the UV and Violet lasers tend to emit light at low wavelengths and can be quite bright.

However, other factors can also influence fluorochrome brightness, such as the efficiency of the excitation and the laser with which it is being excited. For example, PE can be excited by both the blue (488nm) and yellow-green (561nm) lasers. However, the excitation efficiency (or maximum) is highest when excited with the 561nm laser. So, if you have an instrument that only has a 488nm laser but not a 561nm laser, fewer PE molecules will be excited, and fewer photons will be emitted as a result. This means that the emitted light that you see will be dimmer than if you had used the 561nm laser.

Therefore, when testing new fluorochromes, don’t assume that a fluorochrome with a high wavelength will have less energy and be “dim”, or vice versa. It’s important to test all of your reagents and assess their brightness on each specific instrument.

Once you’ve established “dim” and “bright” fluorochromes on your instrument, use this information to decide which antigen you need to detect with which fluorochrome. Brighter fluorochromes are important to use when the antigen you’re detecting is rare or dimly expressed and cannot be otherwise resolved with using a dimmer fluorochrome.

Of critical importance is that fluorochromes readily bind, or are conjugated to, antibodies:

Antibodies are specific to one and only one antigen. Thus, mixing conjugated antibodies with cells or particles of interest facilitates those antibodies to bind to specific antigens, allowing us to indirectly identify those antigens based on their emitted fluorescence, shown in the images below:

It is by using a mixture of different antibodies conjugated to different fluorochromes that allows researchers to deeply characterize cell phenotypes and functions.

Fluorochromes are key to identifying cells and their functions using flow cytometry. The ability for fluorochromes to fluoresce and emit light at defined wavelengths allows researchers to indirectly characterize a wide variety of particles and deeply advance knowledge of human, animal, and plant biology.