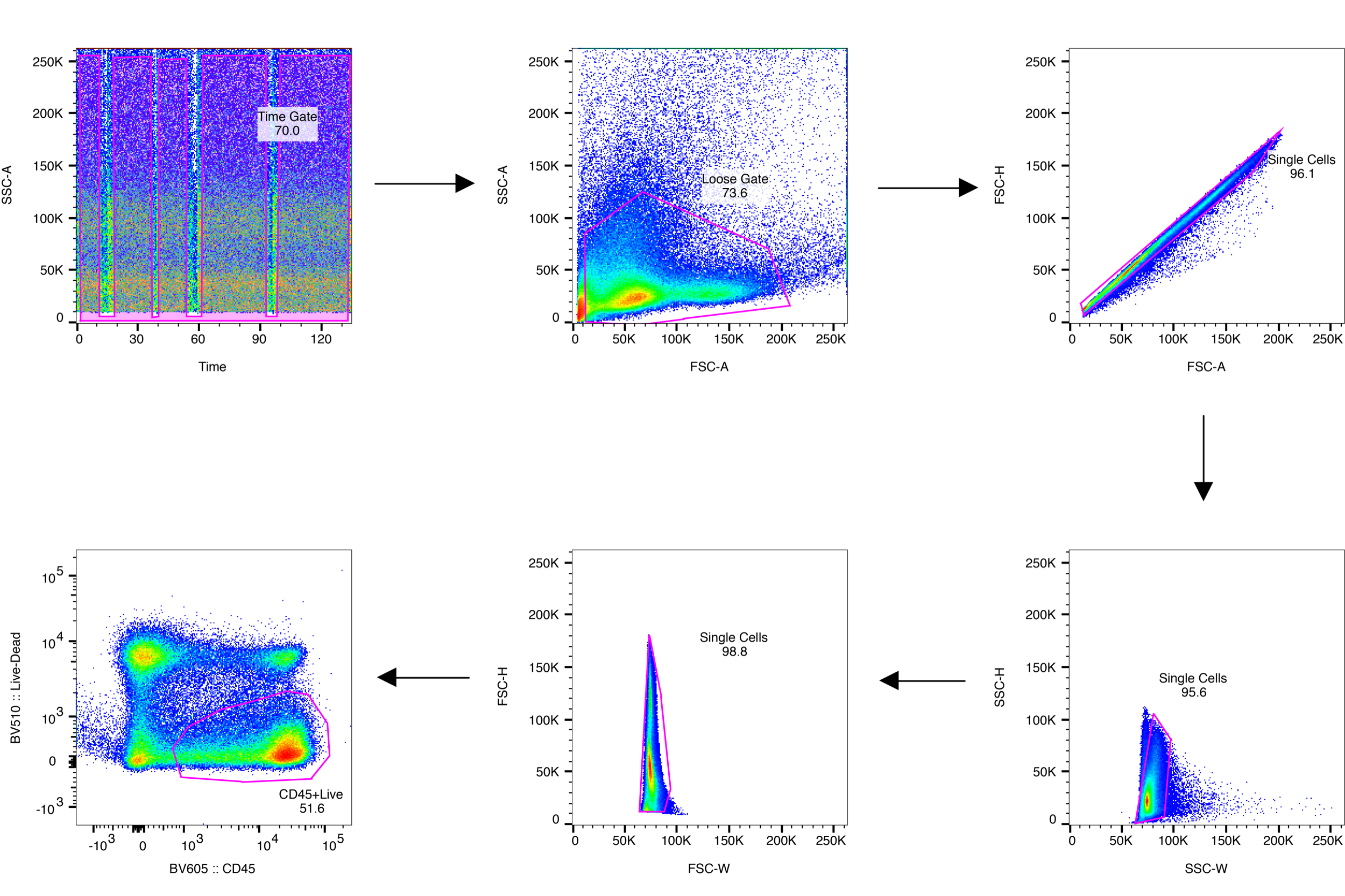 No matter what cell type you’re interested in exploring with flow cytometry, the majority of analyses start with the same basic gating strategy.

These gates are critical for cleaning your flow cytometry data and facilitate the removal of debris in your data due to air or clogs, removing cells which have aggregated together, excluding electronic noise from the instrument, removing small particles which are not intact cells, and including only your specific cell type of interest based on the properties of blue light scatter alone.

At the end, I will go over gating with CD45 and a live/dead dye for any experiments that involve discriminating leukocytes and non-leukocytes, something which is widely useful when analyzing tissues and blood from people and animal models.

Getting started analyzing your flow data cytometry with the time gate

A good place to start gating your flow data is by using the Time gate.

The time parameter measures the duration of each sample run. By analyzing the time gate in relation to a scatter parameter like SSC or FSC, you can identify and remove periods of time during your run where micro bubbles, micro clogs, or dry air were introduced.

This is important because when cells and fluorochromes pass through the laser beams in the presence of micro bubbles, clogs, or air, your results and data can be greatly altered.

For example, when micro bubbles pass through the tubing and the laser interrogation point, the bubbles can scatter and deflect fluorescent light in different directions and introduce what looks like false positives.

Clogs and micro clogs are a buildup of cells and material passing through the lines. As these clogs burst, a whole bunch of cells can suddenly flow through the lines and present like large cells which are positive for many markers. A doublet gate helps to resolve such a problem, however, it’s good practice to also eliminate this artefact with the time gate.

Air introduced at the end of a sample run can also make your data look “messy”, and this “messiness” can greatly affect the results of your data. Air takes on the appearance of cells scattered all over the place on your plots.

For me, forgetting to exclude pockets of air in my time gate has drastically decreased the perceived purity of a sort, making it look far less pure than it actually was due to the introduction of “cells” (which were really air) scattered all over the place.

How to identify acquisition problems with the time gate

You can identify acquisition issues in the Time gate by looking for ‘spikes’ in the data, or an obvious end of the sample running through the lines (i.e. when a sample “runs dry”) and air is introduced. To eliminate these problematic areas, I recommend gating around these regions.

Below is an example of the time gate and how to gate around problem areas:

What comes next? Drawing loose gates around your populations of interest

Once you’ve cleaned up issues related to bubbles, clogs, and air in your data with the time gate, it is often useful to draw a ‘loose’ gate around your specific cell type of interest at the exclusion of cells and particles in which you are not interested. The best dot plot to draw the loose gate is a FSC-A x SSC-A plot.

It can be both difficult or easy to draw gates around your cell type of interest from the FSC-A x SSC-A plot. This is one of the reasons why a loose gate, compared to a tight gate, is recommended.

For example, if you’re gating on whole blood, it’s fairly easy to identify your lymphocytes, monocytes, and granulocytes. Drawing a gate around one of these populations and not the others keeps your analysis better focused on the data which is relevant to you.

Gating on certain other tissues can be trickier, but at a minimum, it is often useful to draw a loose gate that excludes debris found at the very bottom left corner of the FSC-A/SSC-A plots.

Drawing a loose gate around your population(s) of interest will eliminate unnecessary cells and debris from downstream gates, allowing you to concentrate your remaining cleaning gates only on your population of choice.

An example of loose gates drawn on whole blood (left) and lymph node (right) which excludes debris and focuses only on my population of interest are shown below:

It’s generally useful not to make these gates too tight, because you do not want to exclude your cell type of interest from your analysis. Once you have completed drawing your gates, you can back-gate and see exactly where your cell population lies in each of your previous gates. This ensures that you don’t exclude your cells of interest at any point during your gating.

Once you’ve completed drawing your time gates and loose population gates, the next step is to draw a couple of gates that help to discriminate when two or more cells are stuck together as they pass through the flow cell.

Analyzing only the cells which flow through the stream one at a time is a critical step in the cleaning stage. This is because cells which are stuck together can appear positive for antigens which you would not normally expect to be positive on one single cell type.

For example, a T cell stuck to a monocyte might look like one CD3+CD14+ cell. You might think that you’ve discovered a novel cell type, when in reality, those were two distinct cells stuck together passing through the cytometer and giving the appearance of only being one cell.

There are several parameters which are useful to eliminate “doublets”, or cells stuck together, and I suggest using all of them. These parameters are:

Single cell gating is the place to draw tight gates. It’s important, here, to exclude events which are extra wide (the Width parameter) and extra tall (the Height parameter) which identify cells that are stuck together. Again, once you’ve completed your gating strategy, you can back-gate to ensure that you’re not missing any cells in any of these preliminary cleaning gates.

You should note that Diva software on BD instruments does not acquire FSC- and SSC- Height and Width parameters by default. Be sure to put a check mark on those parameters when you’re acquiring data, as it’s not something that you can add retroactively.

A lot of flow cytometry research is based on analyzing tissues from humans or animal models. An excellent way to discriminate leukocytes from non-leukocytes is by using the CD45 marker which is found on all white blood cells.

Sometimes, particularly if you’re looking at whole blood samples, the CD45 marker isn’t necessary because nearly every cell in the sample will be a leukocyte.

However, most tissues include both leukocytes and non-immune cells which constitute that tissue. Using the CD45 marker to delineate between white blood cells and non-leukocyte, resident tissue cells, is extremely useful as a preliminary gate.

One other reason why you should include CD45 in your panel if you are looking at immune cells is because it can be highly useful as a denominator when reporting proportions of different cell types. So instead of using your loose “lymphocytes” gate as a denominator, or the immediate parent gate as a denominator, you can normalize all of your populations to each other by comparing them to the percent of your cell type out of CD45+ cells.

Live-dead gates discriminate cells which are alive from cells which are dead. The live-dead dyes tend to be amine-reactive dyes which bind strongly to nuclei. These dyes are only accessible to nuclei within dead cells and not living cells because they are porous and allow the dye to enter.

Thus, dead cells fluoresce brightly for the dye while live cells will be negative for the dye.

Here’s an example of gating with CD45 antibody and live-dead dye:

Live-dead dyes are essential for any tissue which is not whole blood or fresh PBMC, and one could even argue that best practice would still include using a live-dead gate in those tissues as well.

This is because dead cells, which are found in basically every processed tissue or cryopreserved tissue, have a pesky habit of being porous and internalizing fluorescent antibodies through these pores. This antibody internalization makes the cell look positive for many markers for which it is NOT positive. Without a live-dead marker, there is no fool-proof method to figure out if the cells that you’re looking at are really positive for all of those markers, or if it’s just an artefact of a dead cell.

It is my experience that dead cells do not always build up in one region of your FSC-A x SSC-A gate, even though at times it may appear that way.

Dead cells can be found all over the place, including in your main region where your cell type of interest is located. Cells can die by various death mechanisms, and each of these will cause the cell to change its side-scatter and forward-scatter properties, making it impossible to gate out dead cells simply by cell location in a FSC-A x SSC-A plot.

Putting It All Together

If we put together all of the gates I’ve described here, then a basic gating and cleaning strategy to get you started would look like this:

Once you’ve implemented these “starter” gates, then comes the fun part – identifying the population in which you’re really interested! And that depends entirely on you and your research question.

Thanks for reading and be sure to comment or write me with questions!